While I’ve given up on my belief in the tooth fairy, I like to think that karma is real.  I’ve been thinking about the story of a retired janitor in Vermont named Ronald Read.  He died recently at the age of 92, leaving his life savings to a small community hospital and an underfunded public library.  For much of his life, Mr. Read worked as a gas station attendant.  In retirement, he worked part-time as a janitor, sweeping floors at the local JCPenney.

After Mr. Read passed away, the executor of Mr. Read’s estate opened his safe deposit box to find it crammed with $8 million worth of old-fashioned stock certificates.  Most of the 90+ stock holdings were in stodgy old-school companies like AT&T, Procter & Gamble, General Electric, and Johnson & Johnson.  Mr. Read was so humble that even his family had no idea that he had amassed this much wealth.

There are so many lessons that we can learn from the story of Ronald Read.  I’ll list some of them, in no particular order:

(1) Patience – Today, we can buy and sell stocks with a smartphone app from anywhere in the world. With a couple clicks, we can sell everything based on our fleeting mood swings. If it were cumbersome and time-consuming to make a trade, I imagine we would be more likely to hold high-quality companies for decades.

(2) Optimism – They didn’t find cash or U.S. Treasury Bonds in Mr. Read’s safe deposit box.  Mr. Read clearly had faith in the perpetual power of American capitalism to grow his investments.  Pessimists do not amass this type of fortune.

(3) Judgment – Mr. Read’s faith in corporate stewardship had limits.  By buying companies with a long history of paying dividends, he was assured that he would get a nice payout every quarter.  Profits not paid out as dividends often end up funding unwise acquisitions and excessive compensation for executives.

(4) Frugality – Mr. Read was clearly passionate about not wasting resources.  Those who knew him talk of how he used safety pins to hold his coat together, how he parked his car far from where he was going to avoid having to feed the parking meter, and how he collected wood from fallen trees on the roadside to feed his wood-burning stove for heat.  I know few people who could compete with Mr. Read in living-on-the-cheap, but it’s worth a try.

(5) Wisdom – Mr. Read’s frugality took him to the public library, where he read about investing from reputable sources.  He didn’t get riled up by people screaming at him on CNBC to “buy, buy, buy” or “sell, sell, sell.”  He didn’t get scared away from stocks by the disingenuous fear-mongering on Fox News or get fixated on the obsessive coverage of disasters on CNN. We should limit our learning to reading unbiased, well-researched sources.

(6) Karma – Unlike people who seek recognition for their donations so that they can bask in the feel-good glory of being charitable, Mr. Read quietly amassed his $8M legacy while depriving himself of worldly luxuries.  I hope that Mr. Read’s humility and benevolence contributed to his good investing karma.

In summary, while most of us are best served with a globally diversified portfolio of index funds (better diversification, simplicity, tax-efficiency), it is hard not to be drawn to the idea of picking a basket of quality companies and then sitting tight for decades as the dividends automatically reinvest (DRIP) for free.  Then again, the stock certificate below is a reminder that diversification is important (and that stock certificates can have naked people on them.)

To follow this blog, please enter your email address at the end of this post (on mobile) or upper right corner (on desktop).  Thanks for reading! 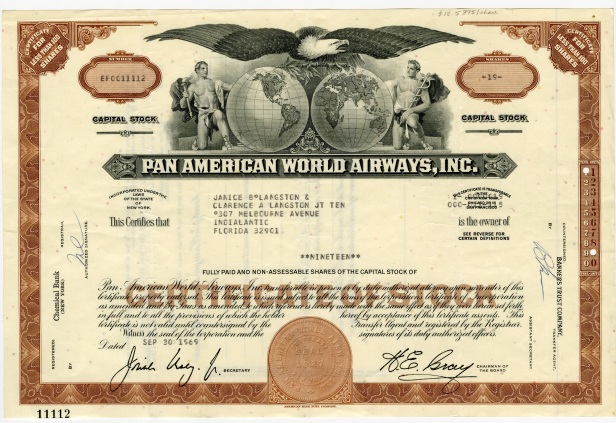